Here at Vom Ruff Kennel, We Have been producing Quality Working Line German Shepherds since 1978. We have a small farm in the foothills of East Tennessee that we are bringing up-to-date. We just completed our 2 kennels to house our Shepherds with 2 whelping rooms. We are currently working on our Obedience and Obstacle Course which we hope to open to the public soon. Martha is a Certified Obedience Instructor and thoroughly enjoys working with the dogs.

Our Mission is to provide the public with quality well bred German Shepherds who meet or exceed the breeds standard We take great pride in selective breeding where we take the weakest traits of a female and breed her to a male who is very strong in that trait thus improving the quality of the pups and the breed in general. We breed for disposition, temperament, courage and intelligence. Our dogs know the difference in a threat or not and have the courage and intelligence to deal with it. You will never find a more loving friend, companion, or family protector. 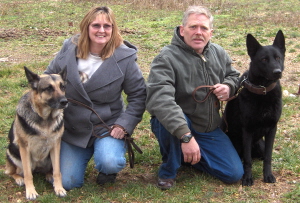 Encourages multiple visits and wants your entire family to meet the animal before you take it home. Provides you with a written contract and health guarantee and allows plenty of time for you to read it thoroughly. The breeder should not require that you use a specific veterinarian, however can make suggestions due to their expierence. In addition to the above criteria, you’ll want a breeder who requires some things of you, too.

A reputable breeder doesn’t just sell her animals to the first interested buyer! The breeder should require you to Explain why you want the animal. Tell them who in the family will be responsible for the animals daily care. Have you provide a veterinary reference if you already have animals or, if you don’t have other pets, they should ask which practices you are considering for your new animal.

Sign a contract stating that you will return the animal to the breeder should you be unable to keep the animal at any point in the animals life.

Steve has some the of the highest quality German Shepherds that I have seen. We are so pleased with not only the puppy, but also how professional and fast Steve was with our purchase and papers. He is a Dog Lover and his care shows in his product.Our puppy is Beautiful, she is of the best temperament and extremely smart. She has been so easy for us to train. We can’t be happier, and believe me if your interested in owning  a real German  Shepherd, Steve is a Great Breeder to buy from. First I want to thank you for such a beautiful and well bred German Shepherd, Cruz. He is truly a magnificent dog. He is smart, well behaved and learns quickly. He has completed his obedience training and started his protection training. The pictures I have attached are of him @ 1 year old to the day. I would recommend you as a truly honest breeder of a TRUE GERMAN SHEPHERD to any who asks about my handsome dog. He is 98 lbs. at 1 year old. Thank You for him, he has made my family complete again.

Stephen, I could not be more pleased the GSD pup I purchased through your kennel. It was very easy to communicate and work with you to get the Pup I wanted with my goals in mind, you made the process of shipping the pup painless and worry free. Cain has a phenomenal prey drive and tirelessly strives to get to anything that I make “Come Alive”, He has made Protection Work and even Narcotics work a breeze as I can get him into drive very easily and then transition him seamlessly into working. Cain’s intelligence and confident temperament have made him the perfect combination for our K9 Team. Again Stephen Thank You for supplying such an awesome dog.

I cannot thank you guys enough for the two beautiful German Shepherds we have purchased from you. After having Fedor for 12 months, I was so happy with him and he turned out to be such a beautiful boy that I had to get another puppy from you! Meeka is amazing!  She has an incredible drive and a wonderful temperament. We are currently working with her on basic obedience and tracking. Fedor has finished his obedience and is being trained in personal protection. Both Fedor and Meeka are wonderful with children and incredibly intelligent. Steven and Martha, you guys have truly blessed our family.

When my wife and I decided it was time for a new dog we spoke with a local K9 handler in Pennsylvania who put me in touch with Mr. Ruff.  After speaking with him on the phone about what we were looking for in a dog he seemed confident that his German Shepherd’s would be the right fit for our family.  I was concerned about health issues and temperament towards people and other animals and since I am a Police Officer I wanted protection for my wife when I was at work..  We picked up our first dog from him in February 2017 (the black one).  As soon as she came home she made friends with the cats and other older dog we had.   Her puppy playfulness may have been more than they wanted but she was never aggressive or violent with them.  Unfortunately we lost our older dog several months later.  Not wanting her to be the lone dog in house full of cats we again contacted Mr. Ruff who was expecting a litter.  I wanted a male this time so after a second 8 hour one way drive to Tennessee we returned with our second German Shepherd in December of 2017.  So far he’s 10 months younger than her but his head and paws are already bigger than hers!  Both are quick to learn and love to be around people, especially children.  They have no problem barking to alert us when someone comes to the door but don’t seem startled by loud noises like thunder or fireworks.  Training continues to mold them into the well behaved adult dogs I know they will be as they get older. 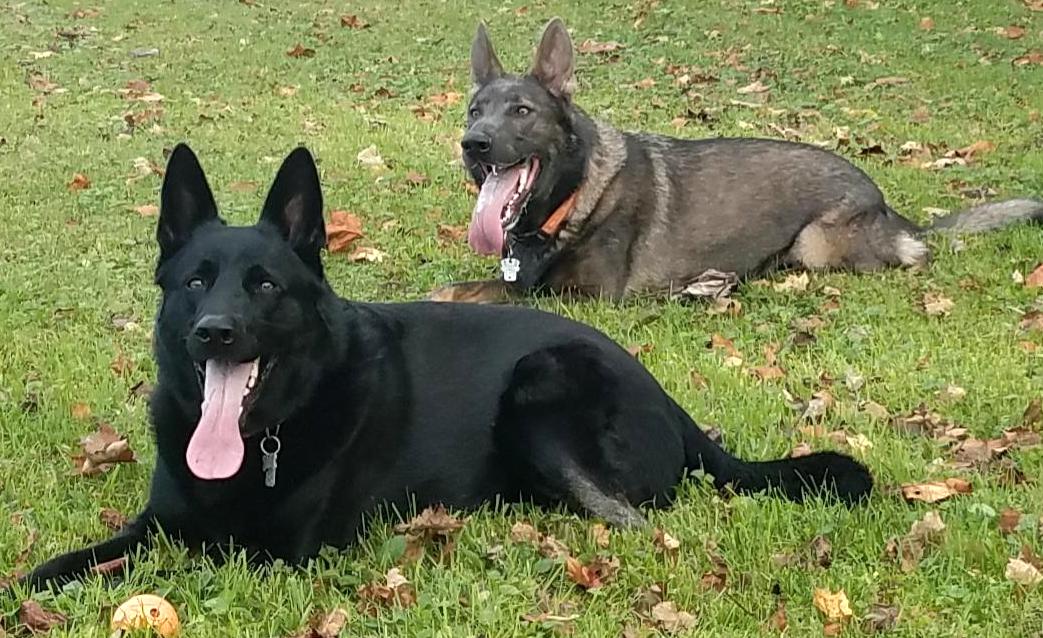 Dear Steven and Martha,
Our “puppy” Bosco is already 9 months and he is fantastic. Bosco has beautiful thick hair and is extremely strong. He doesn’t stop, very active, and has a lot of energy. He is the happiest when my husband and I take him on walks or to the park. Bosco already guards the backyard. Although, he is friendly with visitors that come to the house, he really still enjoys a lot of playtime. Thanks for all the work and we are really in love with our Bosco.  Here are some pictures of him as he has been growing. (note: pictures coming soon) Thanking you from Miami, Steve and Martha,
Luger is now 10 months old and is doing great.  He is wonderful dog to our children (ages 2 and 4).  He does everything they do-including climb the swing set ramp and slide down. He is a beautiful dog and so loving.  Our neighbors love his company as much as we do.  Thanks again.  We’ll gladly come back to your farm for our next Shepherd.

I have known Steve & Martha for some time now. I have to say that they are great people and very dedicated to the working German Shepherd. I have been involved with canine training for 18 years, so I know there are allot of unethical breeders out there. Steve & Martha have excellent working lines and believe as I do that the German Shepherd should above all remain a working breed. That being said they know that you should only breed to better the breed, and in doing that you also have to know how to pair the correct male to the correct bitch. They have to compliment each other while correcting faults that may be present. You also have to know how to do a proper evaluation on the different drives the pups will have to know which home the individual pup would be best suited. Because we all know that everyone is not ready to handle a very high drive pup.
Steve & Martha have the experience to know the above, and are honest people that will follow their contracts. In the many years that I’ve been involved with the working breeds, I can honestly say that Steve & Martha are among the best people I know and I would highly recommend them if you are looking for a great German Shepherd.

I first met Steve Ruff via a phone conversation. I called him and asked him for information that might help me with a German Shepherd dog that I was fostering at the time. Steve gave me at least an hour of his time that first conversation! I called Steve a few more times with questions about the two German Shepherd’s that I was fostering and each time he answered all of my questions and never rushed me off the phone. I have to say I knew that this was a person I would contact when it came time for me to own my own German Shepherd dog. My occupation is a Personal Trainer, and being a very physical person I wanted a working dog that really WORKED. Steve and Martha spent three hours with me when I came to their kennel/home. Steve had already earmarked three puppies that were possible contenders. Two females and one male. Just observing the puppies I picked out the male (I thought I was going there to get a female). This had been a puppy that Steve thought might be the right dog for me and he was right! Now at almost 6 months of age my pup, Austin and I attend private obedience training with noted dog trainer Tami McLeod. With Tami’s guidance I plan on first working on my BH then on to Schutzhund I.Austin is of VERY steady character, high drive, and a lot of FUN!!!!I plan on having three German Shepherd dogs, all working, and the only place I will go is Vom Ruff Kennels.You cannot have a better dog or a better experience that having Martha and Steve guide you towards finding that perfect dog. 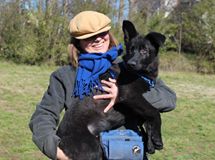